The essential therapeutic step in varicose veins is to treat the proximal insufficiency point (PIP). If that point is not over the  peripheral venous system, the more proximal, including pelvic venous system should consequently be considered as a possible source area.

The term pelvic congestion syndrome (PCS) is a complex of symptoms summarized, which essentially refer to lower abdominal pain in women in connection with displayable venous plethora. The dividing line between “physiological” cycle-dependent symptoms and pathological menstrual cramps is unclear. The reason we could find in the majority of patients as a PIP, a reflux from the left ovarian vein (ovarian vein reflux = OVR). (ovarian veins: see pictures: left: normal anatomy, right: OVR) 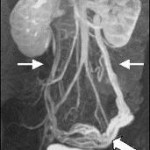 In analogy to the therapeutic concept of classical peripheral varicose veins with interruption of the pressure and volume load on the origin of reflux there is a similar approach to the PIP to find. The determination of hormone levels in peripheral veins in patients with proven pelvic vein insufficiency (insufficient ovarian vein, dilated plexus uterinus, insufficient internal iliac vein) showed significantly higher estradiol levels than in patients without the insufficiency. What effect has an increased pressure in the veins of the pelvis on the development of peripheral varicose veins, is little explored. By magnetic resonance tomography or phlebography the pelvic veins are examined.

All common treatment methods attempt by interrupting the pressure/flow at strategic locations with or without obliteration of pathologically altered vein segments (clipping: see photo) to produce the physiological, heart directed flow again. In this context, if the interruption of the refluxing ovarian vein could lead to less recidive varicosis has to be assessed by further observation. 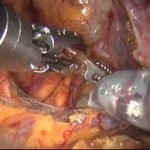