You are here: Home1 / Compression stockings 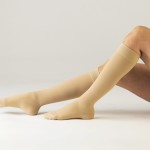 Compression elastic stockings are the most effective preservative treatment of venous insufficiency. (The image was kindly given from a company.)

The main characteristic of venous insufficiency is the dilation of veins with faulty valves and is followed by an increase in endovenous pressure.

If external pressure is applied by wearing elastic stockings, veins are emptied of blood and venous hypertension is counterbalanced. Elastic stockings also help for a quicker recovery after an invasive treatment because the ecchymotic areas that inevitably appear are significantly less in number and fade in a shorter amount of time.

Graded compression elastic stockings are called this way because they do not apply uniform pressure across the lower limb. The maximum pressure is exerted on the ankle region and decreases on the tibia and even more on the thigh region.The pressure which the elastic stockings exert on the ankle determines the intended use and is measured in millimeters of mercury (mmHg). Based on this, the stockings are classified into four classes, from class I to class IV.

The Class I stockings exert less pressure, from 14 to 22 mmHg and they are mainly used for the prevention and less for the treatment of venous disorders.

The Class II stockings exert pressure from 22 to 30 mmHG and they are the ones more commonly in use, either for the preservative treatment of venous insufficiency or after therapeutic interventions, such as sclerotherapy and surgeries.

The Class III and IV stockings have a more powerful compression and are used for more severe forms of venous insufficiency and chronic venous hypertension, such as lipodermatosclerosis and venous ulcers, as well as for the management of lymphoedema.

Venous insufficiency and lymphoedema are often accompanied by swelling (oedema), especially in the ankle area and at the tibia. The oedema worsens during the course of the day due to gravity and is usually worse in the afternoon hours.

The oedema lessens significantly during sleep, especially if the patient places his legs in an elevated position, and it starts growing again after rising from bed in the morning. The elastic stockings should be worn early in the morning, preferably before the patient gets up, in order to prevent the oedema from increasing during the day.

The stockings should always be removed before going to sleep, except for the first 24 to 48 hours after a surgical treatment and only if the doctor gave such instructions.

Elastic stockings are available in different lengths, such as knee-high, thigh-high, and pantyhose. There are also special compression pregnancy pantyhose and custom elastic stockings for specific applications.