You are here: Home1 / Alopecia-Hair loss

In hair loss, we can distinguish between effluvium (from the Latin failure): This refers to the process of the standard increased hair loss. Increased hair loss does not necessarily lead to alopecia.

Alopecia: This is generally referred to a visible clearing of scalp hair, ie a condition characterized by abnormally “thinning” head hair (hypotrichosis) or hairless areas of the skin (alopecia in the strict sense). 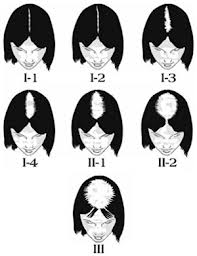 Images according to the publications:

This type is as a hereditary marked hair loss (induced alopecia: androgenetic or androgenic alopecia, by androgens (hormones) hair loss). It is a hypersensitivity of the hair follicles to the steroid hormone dihydrotestosterone (DHT: a metabolic product of the major male hormone, testosterone). DHT is derived from testosterone by transformation, with the help of the enzyme 5-alpha reductase type II. DHT shortens the growth phase of the hair follicles and shrinks them, so that only fine hairs evolve, and finally the hair formation ceases. The number of hairs decrease.

Androgenetic alopecia is by far the most common form of hair loss in men and women. It often starts at a young age, sometimes after puberty. In the Middle Ages, it affects about 50% of men and increases afterwards to over 80%. While androgenetic alopecia in males begin often before 20 and often the front line is reduced, in women it start in the third decade with gradual thinning of the hair in the crown area. Thus begins an ongoing process with mostly episodic course.

In this form of hair loss, many hair follicles simultaneously go into the regression phase. The result is a diffuse thinning of the entire head of hair (called diffuse alopecia). Diffuse alopecia is regarded as a symptom of various disorders of the whole organism and occurs, for example in severe general diseases, stress situations, such as surgery, high fever, radical diet cures, iron deficiency, as an adverse effect and in diseases of endocrine glands (thyroid, parathyroid, pituitary). Discussed is also the influence of severe psychological stress. 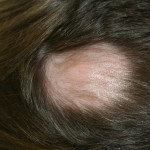 From alopecia areata (also: Alopecia Circumscripta / alopecia / Areata Celsis / circular hair loss) refers to a round, localized abnormal hair loss (about 80% of the persons concerned, starting from the head, in men in the beard area or in exceptional cases in the range of body), which was first mentioned by Hippocrates and was then called in reference to a disease such fox (Greek: ἀλώπηξ, alopex, “fox”), because you could see that some foxes losing his hair, patchy.

Underlying is an immune disorder, which leads to a specific immune cells to attack the hair root cells. The immune disorder often occurs in allergies or other causes of impairment of the immune system (infections, metabolic disorders, psychological stress).

If you want to do something against excessive hair loss, you have the options to take medications or to apply a hair restorer. In androgenetic alopecia (system-related hair loss) both acts on only as long as it is applied. Also fine hair (hair follicle or) can be treated to strengthen the hair.

Building products, such as Biotin, zinc, vitamins. These are only effective to improve hair quality but not effective against hair loss of hair itself. The treatment of genetic, hormonal hair loss is not usually paid by the insurance company.

Minoxidil: Actually introduced as a remedy for high blood pressure, was found by chance that this drug promotes hair growth. Minoxidil is applied in solutions 2 x daily to the scalp.

It is taken in tablet form 1 x daily and is currently used only for men. It must be taken regularly, since it works as long it is taken. The costs are not covered by health insurance .

In alopecia areata the bald areas are specifically treated by injection of certain drugs and by local light irradiation (L- PUVA therapy). Accompanying attempts (even with naturopathic methods) to revoke the disorder of the immune system can be applied.

Mesotherapy : Mesotherapy has recently been introduced in the treatment of diffuse and circular hair loss. In the diffuse alopecia drug mixtures that promote blood circulation, nutrition and metabolism of the hair root cells are injected through fine needles near the hair roots using fine needles. The treatment is initially weekly, later, at the end of 14-day and 4-week intervals. Also in alopecia areata shows this form of treatment, followed by addition of steroid cristal suspension excellent effects .