Depending on the origin of the disease the division is as follows:

Secondary varicose veins due to other diseases such as deep vein thrombosis, with formation of a bypass circuit on the superficial venous system (about 5 % of cases).

The cause of the idiopathic varicose veins is a congenital vein wall or connective tissue insufficiency. The blood is transferred to the heart by the muscle pump, against the force of gravity. When the vein walls are weak, the surrounding tissue does not build up enough pressure and the movement of the legs is missing, eg through activities that require prolonged standing or sitting, so more blood remains in the legs. (image: left:regular flow, right: reflux) 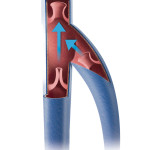 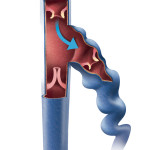 The veins are stretched until the venous valves no longer close them. The blood flows following the direction of the gravity and of walking, instead to the heart. The varicose veins are caused by an outflow of blood through the superficial leg veins. Consequences are edema (leg swelling), heaviness, itching or nocturnal leg cramps. Furthermore, it can lead to eczema (stasis dermatitis), inflammation of the superficial (superficial thrombosis), or deep veins (deep vein thrombosis) and up to the ulcer (gr. ἐλκος) (“open leg”). The proximal point of insufficiency (PIP), which leads to the reversal of the venous blood flow is identified by using in majority of the color-coded duplex sonography. Noninvasive color-coded duplex sonography is now the gold standard for diagnosis.

An essential therapeutic step in the treatment of varicose veins is the treatment at the PIP. If the point is proximal of the peripheral venous system, the proximal veins, including the pelvic venous system (abdomen – pelvis ) should consequently be considered as a possible source.

Surgical therapies, such as “stripping ” – the ” pull ” of varicose veins – including crossectomy are still the world’s most widely used forms of therapy. However, there are also other methods as the endovenous laser or radiofrequency therapy, and the endovenous sclerotherapy. They lead to the inner damage of the affected veins (the endothelium) thermally or chemically, so that the blood flow is prevented. Wearing compression stockings is needed after the treatment.