According to the recommendations and guidelines of the DGE: 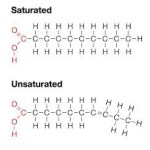 Image according to biochemistry books.

There are fatty acids that are essential to life, but can not be formed by the body itself. Therefore, they are also known as essential fatty acids. One of the essential unsaturated fatty acids include, for example, linoleic acid and alpha-linolenic acid, which belong to the omega fatty acids.

In addition to its role as an energy supplier dietary fats also ensure that the vital fat-soluble vitamins A, D , E, K can be absorbed by the body.

As part of a healthy diet, you should attach importance to the intake of unsaturated fatty acids. Unsaturated fats are found in particular in plant products such as olive oil, canola oil, safflower oil or linseed oil.

In foods containing animal fats, such as meat, lard, milk and butter, it is hard to find unsaturated fatty acids.

In addition, you should make sure that a sufficient amount is taken in essential fatty acids such as linoleic acid and alpha -linolenic acid because the body needs them but can not produce by itself. Products with a high content of essential fatty acids are, for example, vegetable oils. Sunflower oil, soybean oil or corn oil are rich in linoleic acid. In walnut oil or canola oil much alpha-linolenic acid is included. Essential fatty acids is attributed to a protective effect on the arterial vascular system. In addition, they should have a positive impact on the skin for chronic skin diseases such as psoriasis or eczema (atopic dermatitis) have.

Trans – fatty acids are formed during the industrial processing – in the partial hardening – of fats and oils that are rich in unsaturated fatty acids. Foods that contain hydrogenated fats – eg puff pastry, fried foods, potato chips or other snack items – often contain trans fatty acids. In small amounts, these fatty acids are also naturally in butter or milk.

Tips for dealing with fats

Take care, for example, hidden fats in meats, cheeses, pastries, snacks and chocolate. Choose low-fat cooking methods such as in the oven with baking sheet in the clay pot, in wok or specially coated pans.

For roasting a small spoonful of oil is enough, spread the oil with a brush in the pan. Simmer the food instead of frying them, if you add a little water before heating, the oil is not too hot. Be sure to use fats with a high proportion of unsaturated fatty acids, which are especially cold pressed vegetable oils such as sunflower seed, rapeseed, sesame oil or linseed oil.

Enrich the low-fat prepared foods just before eating with a spoon of this valuable plant oils, instead of admitting much fat already during the preparation.

Low-fat alternatives to mayonnaise for example, are Yogurt, cottage cheese or sour cream.

During physical exertion, the first energy is consumed from carbohydrates, then the energy comes from the fat deposits, but this occurs after about 30 minutes of continuous exercise. The fat burning is activated at this especially with lighter endurance exercise, because the more intense the physical activity, the greater the energy coverage by the faster- usable carbohydrates. For those who want to get rid of annoying fat reserves through sport, so is true: At least moderate training for half-hour without interruption, after that the extra weight goes on the collar!

About 25 to 30 percent of total energy intake should be covered by fats. Only certain groups of people, such as heavy laborers or athletes, the need for up to 40 percent. Children and young people have a higher fat requirement, which is between 35 and 40 percent depending on age. The average fat intake is far above the recommended requirements.

What foods are rich in omega -3 fatty acids, how much do we need?

Which fats are suitable for roasting and frying food ?

For roasting are suitable in principle all fats and oils. As part of the minimization of acrylamide formation in starchy foods such as potatoes or potato pancakes is currently recommended the use of margarine. For frying all oils and fats are suitable, which have a high content of monounsaturated fatty acids, such as olive oil or high oleic sunflower oil. In general, the fats and oils should have a low content of saturated and highly unsaturated fatty acids such as linolenic acid, because their susceptibility to oxidation is very large. The frying temperature should not exceed 175°C.

The fryer only at 60-80°C for 10 minutes to heat up the fat to melt, and only then to max. set up 175°C. Characterized local overheating and premature oxidative fat degradation is prevented.

To reduce the formation of acrylamide during frying of potatoes from raw potato slices, potato pancakes, etc. put margarine or oil with some margarine in a frying pan (at least 80 % fat). Generally fried potatoes should be made out of boiled potatoes.