You are here: Home1 / Crossectomy-Phlebectomy

One of the most known options to treat the insufficient veins is the surgery. In most cases where varicose veins are treated by crossectomy, the so-called vein stripping, the insufficient part of the saphenous vein and all its branches are removed.

At the crosse, in the groin, the most proximal piece of the largest superficial vein of the leg (saphenous vein) is excised from the main vein (femoral vein). Further a lot of veins bild the so-called veins star.The caliber of the veins may vary. The veins should be treated properly so as to avoid the occurrence of relapses. (The image was kindly provided through a company.)

The crossectomy includes the following steps:

• skin incision above the palpable pulse of the femoral artery

• elimination of all outgoing vein branches of this section veins

• Closure of the skin

For the rest of the veins phlebectomy can be performed:

The removal of varicose veins is performed through very small lesions, which are less than one millimeter in length. The lesions are so small that stitches are not necessary for their closure. The cosmetic result is excellent, and the resulting scars will be almost indistinguishable a few months after the operation. Mobilization is immediate and physical exercise is recommended for a few days after surgery.

After the surgery compressions stockings for 3-6 weeks are recommended. 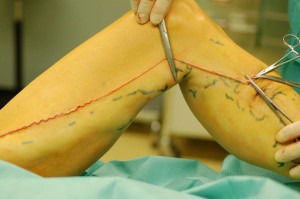