Mesotherapy for the scalp

You are here: Home1 / Mesotherapy for the scalp 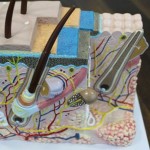 Mesotherapy : Also this method can be used for hair loss.

Mesotherapy is a new treatment option at the onset of hair loss, to strengthen the scalp, the hair and against dandruff.

In Mesotherapy individually to the patient’s needs tailored medications, substances or PRP (platelet rich plasma: see under mesotherapy-PRP) are injected in small doses with fine needles or a special mesotherapy gun directly under the scalp to the hair follicles. Thus, the agents reach exactly where they are needed. Provided that the hair roots are still present, hair loss improves the hair quality, the re-conveyed and sustained growth. The needles used are very thin and have a special cut, so that no pain is felt.

The treatment is an outpatient procedure and takes depending on the size of the area to be treated from a few minutes to half an hour. Usually after a few hours, no more traces of the treatment procedure are seen, so that you can immediately follow up your daily activities.

The treatment is usually carried out several times at an interval of one week to several months. Usually range from 3 to 5 treatments to achieve long -term success.

Already after the first injection, many patients notice that the scalp has a better blood circulation and the hair loss stops. The hair loss is reduced from the third treatment. After about 2-3 months there is usually an increased hair growth.

Since the roots are lost in time, early intervention is important. The earlier the treatment starts, the better the chances of success. Due to poor prospects a mesotherapy is not recommended for more severe autoimmune activity or long-term baldness.

After treatment, the hair must not be washed for two days, so that the injection cant move.