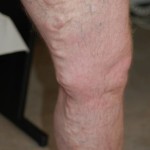 Depending on the origin of the disease the division is as follows: Primary idiopathic varicose veins, caused by genetic susceptibility to venous wall weakness (about 95 % of cases). Secondary varicose veins due to other diseases such as deep vein thrombosis, with formation of a bypass circuit on the superficial venous system (about 5 % of cases).

The cause of the idiopathic is a congenital vein wall or connective tissue insufficiency. The blood is transferred to the heart by the muscle pump, against the force of gravity. When the vein walls are weak, the surrounding tissue does not build up enough pressure and the movement of the legs is missing, eg through activities that require prolonged standing or sitting, so more blood remains in the legs. The veins are stretched until the venous valves no longer close them. The blood flows following the direction of the gravity and of walking, instead to the heart. The varicose veins are caused by an outflow of blood through the superficial leg veins. Consequences are edema (leg swelling), heaviness, itching or nocturnal leg cramps. Furthermore, it can lead to eczema (stasis dermatitis), inflammation of the superficial (superficial thrombosis), or deep veins (deep vein thrombosis) and up to the ulcer (gr. ἐλκος) (“open leg”). The proximal point of insufficiency (PIP), which leads to the reversal of the venous blood flow is identified by using in majority of the color-coded duplex sonography. Noninvasive color-coded duplex sonography is now the gold standard for diagnosis. An essential therapeutic step in the treatment of varicose veins is the treatment at the PIP. If the point is proximal of the peripheral venous system, the proximal veins, including the pelvic venous system (abdomen – pelvis) should consequently be considered as a possible source. Surgical therapies, such as “stripping ” – the ” pull ” of varicose veins – including crossectomy are still the world’s most widely used forms of therapy. However, there are also other methods as the endovenous laser or radiofrequency therapy, and the endovenous sclerotherapy. They lead to the inner damage of the affected veins (the endothelium) thermally or chemically, so that the blood flow is prevented. Wearing compression stockings is needed after the treatment.

The essential therapeutic step in varicose veins is to treat the PIP. If that point is not over the  peripheral venous system, the more proximal, including pelvic venous system should consequently be considered as a possible source area.

The term pelvic congestion syndrome (PCS ) is a complex of symptoms summarized, which essentially refer to lower abdominal pain in women in connection with displayable venous plethora. The dividing line between “physiological” cycle-dependent symptoms and pathological menstrual cramps is unclear. The reason we could find in the majority of patients as a PIP, a reflux from the left ovarian vein (ovarian vein reflux = OVR). In analogy to the therapeutic concept of classical peripheral varicose veins with interruption of the pressure and volume load on the origin of reflux there is a similar approach to the PIP to find. The determination of hormone levels in peripheral veins in patients with proven pelvic vein insufficiency (insufficient ovarian vein , dilated plexus uterinus, insufficient internal iliac vein) showed significantly higher estradiol levels than in patients without the insufficiency. What effect has an increased pressure in the veins of the pelvis on the development of peripheral varicose veins, is little explored. By magnetic resonance tomography or phlebography the pelvic veins are examined. All common treatment methods attempt by interrupting the pressure/flow at strategic locations with or without obliteration of pathologically altered vein segments to produce the physiological, heart directed flow again. In this context, if the interruption of the refluxing ovarian vein could lead to less recidive varicosis has to be assessed by further observation. 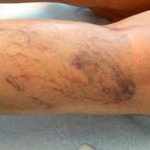 Spider veins are small veins bluish or reddish just below the skin surface. The veins are dilated capillaries and may cover a large area or be isolated. They appear on both face and body. Spider veins on legs are due to many factors, such as standing, hormonal factors, pregnancy, venous insufficiency, obesity, trauma and heredity. Mostly in areas of lower and upper thighs. Spider veins can, but do not point to a disease of the deep venous system. So there should be a duplex examination of the venous system prior to treatment of spider veins. For the treatment of spider veins different treatment methods are offered. The easiest, safest and most especially the one with the best aesthetic results, is the sclerotherapy. This therapy means is injected into the intact fine vessels, which leads to a bonding (“sclerosing”) and thus to a disappearance of the interfering vessels. How many treatments are necessary to get your desired result, depends above all on the number of spider veins. The treatment can be performed as an outpatient. There are no limitations in everyday life, except that you may subject yourself to sunlight for six weeks.